Accompanied for a long time by the change in agricultural practices on its catchment feeding areas, Eau de Paris is crossing a new milestone today by proposing its own aid scheme, designed with and for farmers and approved by the European Commission. A first case in France. 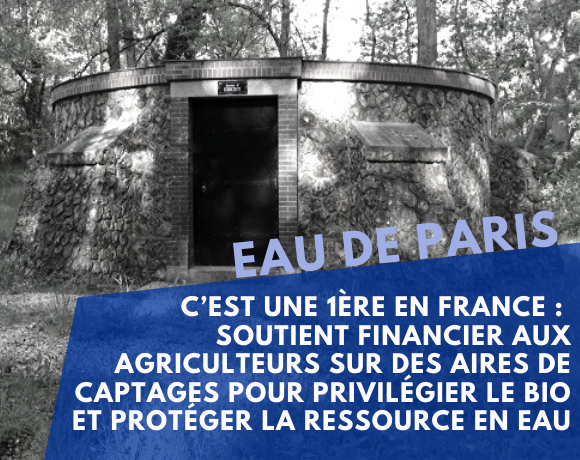 Since its creation, Eau de Paris has been committed to water management based on the general interest. Close to its sources, the public enterprise carries out preventive actions with farmers. They combine technical support, financial support and sector development, to support farms that protect water quality. Armed with this experience, Eau de Paris is now taking a new step by offering its own agricultural aid scheme. This project was validated on January 13 by the European Commission. It will be co-funded by the Seine-Normandy Water Agency and Eau de Paris.

A FIRST CASE IN FRANCE

For the first time in France, a water service has adopted a system of financial aid for agricultural holdings, specifically designed to protect its catchments. This validation rewards the work carried out since 2018 by the Eau de Paris teams to build and validate this original project. The specifications and associated remuneration were built in conjunction with several technical partners (Seine-Normandy water agency, agricultural experts, INRA, etc.) and the farmers themselves, in a logic of "payment for services" ", logic adopted in the framework of the Assises de l'eau. With the support of the Ministry of Agriculture and Food, the project was able to be presented and validated by the European Commission after an appraisal process lasting several months.

The aid scheme aims to support farms towards the adoption of more sustainable farming systems, for example limiting the use of inputs and promoting the development of organic farming and grassland areas. The aid will be granted in the form of grants to voluntary farmers. Part of the remuneration is subject to the achievement of a profit target for nitrate concentrations in water (compliance with the "potable water" standard under plots). The measures are defined according to the type of farm: field crops, livestock, organic farming, protection of very sensitive areas. The contracts, from 6 to 7 years, are long enough to install lasting changes.

This new regime was born out of an observation shared with those working in the field: financial support for the change in agricultural practices should be simpler, more incentive and better suited to specific local areas. Until today, the financial support for farmers has been based on the agro-environmental and climatic measures (MAEC) set out in the common agricultural policy (CAP).

PROJECTS FOR THE TERRITORIES

About 200 farms should be able to benefit from it, on four areas supplying water from Paris. Spread over approximately 146,000 ha, including 87,000 ha of agricultural land, these territories correspond to the main areas of action of Eau de Paris for the protection of water resources. Farmers installed on these four catchment feeding areas (AAC) will be able to join the Eau de Paris agricultural aid scheme this year.

The estimated budget of the aid scheme amounts to 47 million euros over ten years. It will be funded at 80% by the Seine-Normandy Water Agency, which dedicates a budget as part of the national plan for Biodiversity for the implementation of "payments for environmental services" in order to remunerate agricultural practices which protect water and biodiversity. Eau de Paris will contribute 20%, or € 10 million over the next few years. Parisian users will thus directly contribute to the agricultural transition in the territories that supply Paris with water, in a mutually beneficial partnership with farmers.
Farm benchmarking CPES South Downs Groundwater Case Study Pilot