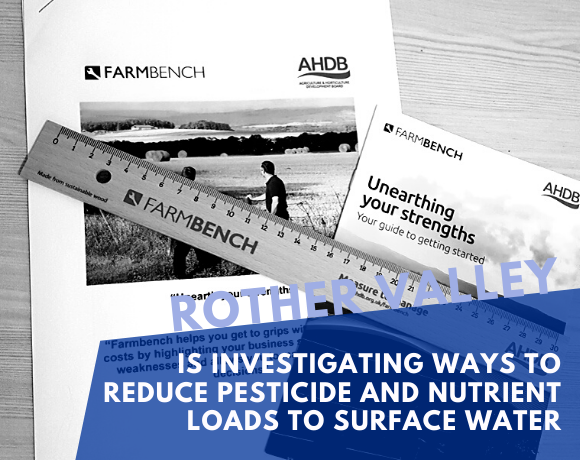 The Rother Valley pilot study is investigating ways to reduce pesticide and nutrient loads to surface water.  An important aspect of this is addressing the source of these pollutants i.e., reducing the quantity of pesticides and nutrients applied to farmland.
One way of achieving this is by highlighting the cost of these chemical inputs to the farm business, and the impact that over-application can have on profit margins. This may promote lower inputs by farmers, while improving the profitability of the business.
We are therefore encouraging the farmers involved in the pilot study to use the ‘Farmbench’ budgeting and benchmarking tool.  Farmbench allows farmers to:

The tool was developed by the Agriculture and Horticulture Development Board (AHDB), a levy-funded organisation supporting farmers across the UK.

A workshop was held by Southern Water and the AHDB on 11th February to promote the benefits of Farmbench to the pilot study farmers, address any concerns and queries, and link the farmers up with support to start using the tool.
Rebecca Brookes, Farmbench Knowledge Exchange Manager at the AHDB explained the idea behind the tool:

"The ultimate aim of Farmbench is to provide a better understanding of their own business, before making evidence-based decisions to improve individual profitability and productivity. This will ensure that their business is on the best possible footing for the future”.

Rebecca noted how an important element of the tool is the benchmarking function, where a farmers can see how their farm compares to others:

“By comparing results anonymously to farms with similar enterprises, Farmbench enables farmers to improve their individual business performance and manage many of the challenges facing the sector, such as price volatility, Brexit, and economic uncertainty”.

For environmental outcomes, benchmarking sometimes reveals how other farms are achieving similar yields with lower inputs of pesticides and/or nutrients, leading to higher profit margins. It is hoped that insights such as these may influence behaviour towards reduced inputs.
For example Stephen Woodley, independent agronomist, sees a huge variation in nitrate application rates between the farms he works with. By bringing to light how much this affects the bottom line, Farmbench prompts farm managers to review their decision making and ensure it is based on evidence rather than guesswork or tradition.
In addition to these benefits, it is envisaged that information obtained via the Farmbench tool will support the cost-benefit analysis of the mitigation measures being trialled under the pilot project. It is important that that the mitigation measures and associated payments are cost-effective for both the farmer and water company, if they are to be rolled out more widely across the catchment in the future.