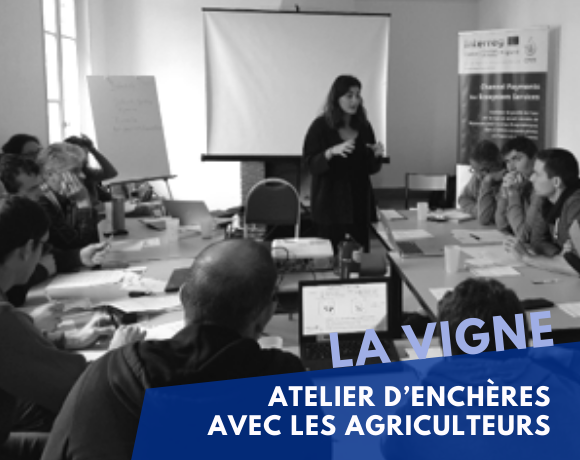 November 28, 2018 during the auction workshop with La Vigne farmers, Verneuil-sur-Avre.
On the La Vigne pilot site, a co-construction workshop with farmers took place on November 28, 2019, co-organized by Eau de Paris and Sara Hernandez Consulting. This workshop was an opportunity to present the CPES project to farmers in connection with Eau de Paris and allow them to participate in research and innovation on PES. It gave rise to enriching discussions on the problems encountered by farmers, and made it possible to discuss the levers of privileged actions of farmers for the reduction of nitrate leaks (plant cover, nitrogen-saving crops, reduction of doses) .
Sara Hernandez Consulting used her PES construction tools at the La Vigne pilot site, after having tested them on a first CPES pilot site (Tremblay-Omonville). The use of several tools of the experimental economy has made it possible to highlight the preferences of farmers in contexts of uncertainty and risk, which characterize agricultural activity. The aim of these experimental games is to understand the behavior of operators, which is private information, in the face of environmental requirements, with the aim of building PES deemed acceptable and sufficiently incentivizing.
Thus, the auctions made it possible to reveal a consent to receive farmers for a change in agricultural practices linked to the achievement of an environmental result on water quality (for the implementation of measures to reduce nitrate leaks regardless of other measures). The auction system then makes it possible to initiate farmers to the correct evaluation of the amount of a PES, for specific agricultural actions and a desired contract duration.
Finally, the data resulting from surveys carried out during the workshop show that the farmers questioned are sensitive to the cohesion aspect on the AAC and believe that a territorial bonus would be a good way of associating a larger number of farmers in the area, with a view to achieving a significant result in terms of water quality. Coordination between actors and transparency of information seem to be points to which farmers attach great importance. These results could thus be useful for the continuation of the experiment and to continue the reflections on PES, in particular within the framework of the next CAP.
These experimental games, conducted in the form of auctions, confirm in the first place the importance of a risk / uncertainty premium. Indeed, below a certain remuneration threshold, farmers may be reluctant to make efforts or make investments to preserve water quality. The monetary incentive, supposed to compensate for the risk incurred and encourage contractualization, must then be sufficient to take into account the risk or the uncertainty that results from the innovation to be adopted. The assumption is that it is possible to reach an acceptability threshold at which the farmer, even in a situation of risk or uncertainty, would be ready to carry out the innovations requested. This threshold would correspond to a "reserve price" which is beyond the principle of additional cost.
LAC AU DUC (Brittany): Rino Iida joins the team Farm benchmarking