In the Western Rother river pilot area (West Sussex, UK) our work with farmers has been progressing well. Supported by the CPES project, Southern Water are working closely with the Rother Valley Farmers Group (a collective group of 40+ farmers coordinated by the Arun & Rother Rivers Trust) and their agronomist (Stephen Woodley) to jointly agree a set of funded interventions aimed at improving soil health and water quality. The Western Rother is a strategically important source of drinking water for Southern Water and its customers, however water quality can be affected by high levels of chemicals, in particular pesticides, arising from agricultural practices upstream. Some pesticides cannot be removed through standard water treatment processes, and others may overwhelm treatment when present at high concentrations.  To address this, as well as to prevent future deterioration in water quality and achieve wider environmental benefits, Southern Water is increasingly working with farmers in the catchment to address the root causes of water pollution. Our soil health pilot aims to gather evidence to show that by improving the health of soils, farmers are protecting both water quality and their no1 asset, and that in doing so, they do not need to use as many chemicals or fertilisers as they did previously. 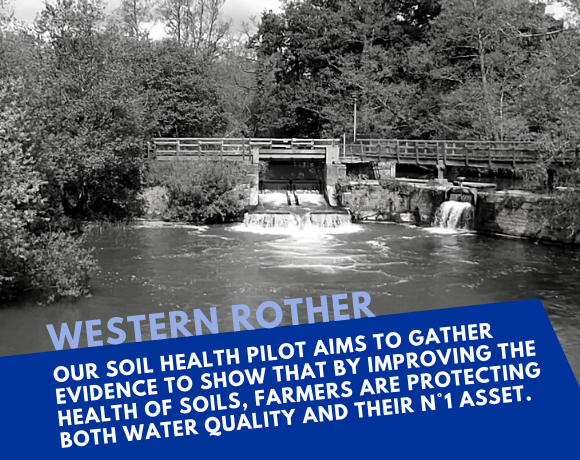 The soil health trials involve working with four farms in the pilot area to agree soil health targets (improving soil organic matter levels), to develop 4 year farm plans (setting out the interventions to be implemented), and to agree funding (logistics and timings around claims and payments) - which includes an outcome-based incentive in the form of a benefit-in-kind such as trees, fencing or hedgerows rather than cash, if the targets for soil health improvements are met. The work has been co-designed with farmers to ensure it delivers benefits to both Southern Water (as the buyer of water quality benefits) and the farmer (as the seller). Agreements were signed with all four farms in the summer of 2020.

To measure success we are monitoring soil health and river water quality and seeking feedback from the farmers involved but have also supported work led by the South Downs National Park Authority (SDNPA) to assess the wider benefits of the Western Rother pilot. The study undertaken by ADAS has identified, quantified and monetised the costs and benefits of the interventions being undertaken. It includes both direct benefits (water quality improvements) but also indirect benefits achieved via the interventions (biodiversity improvements, carbon sequestration, improved yields). The assessment looked at the costs and benefits to the buyer (Southern Water) and the sellers (farmers) but also to other beneficiaries such as the supply chain, the local community and recreational users of the river, the Environment Agency, and the wider general public. This work was completed in December 2020.

The current growing season (2020/21) is the first year of implementation. One of the main aims of the project is to promote more sustainable farming across the wider Western Rother catchment and we plan to raise awareness of how soil health can be protected to benefit long term water quality improvements and to safeguard the future of farming. Going forwards, the organisations involved in the pilot will be working closely with other catchment partners to disseminate learning and to explore the development of future markets.