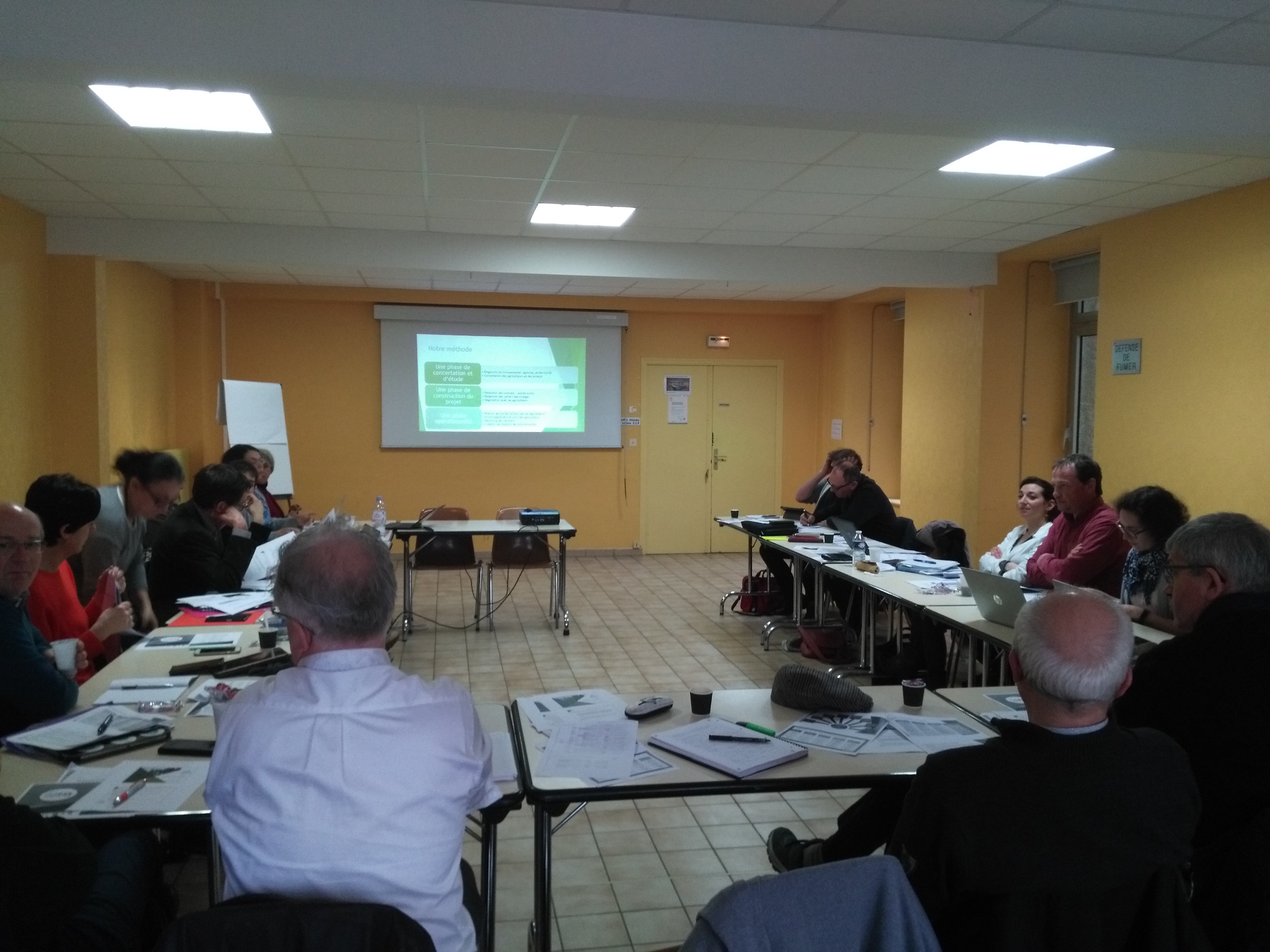 The objective was to compare the PES approaches used in the CPES project with those adopted in France and Brittany by farmers’ organizations. Attendees represented the agricultural profession from a range of organizations: FNSEA, FDSEA (35, 22, 29 and 56), Young Farmers; the COOP of France, the Alli'Homme Association and the EPITERRE brand. This was the first formal meeting between CPES project partners and representatives of the French agricultural profession and organizations. In addition to making contact and exchanging views, the precise objective of the meeting was to determine the conditions for effective collaboration between Interreg CPES project partners and agricultural professionals in the implementation of PES in western France, particularly in the specific case of the Lac au Duc case study.

After an introduction and a reminder of what PES are, presentations on the progress of several PES initiatives being conducted in France and in Brittany by farmers’ organizations were given, namely:

1) A presentation of the EPITERRE brand, which aims to coordinate and support projects launched in France by farmers in the field of PES;

2) A synthesis of a study conducted by the Brittany Chamber of Agriculture, aimed at identifying the various PES projects set up in France to accompany the changes in agriculture;

3) An overview of the Alli'Homme initiative set up in the Finistère department by the FDSEA 29 for the implementation of wetland oriented PES with the preservation of biodiversity and the management of the flood risk as main targets. 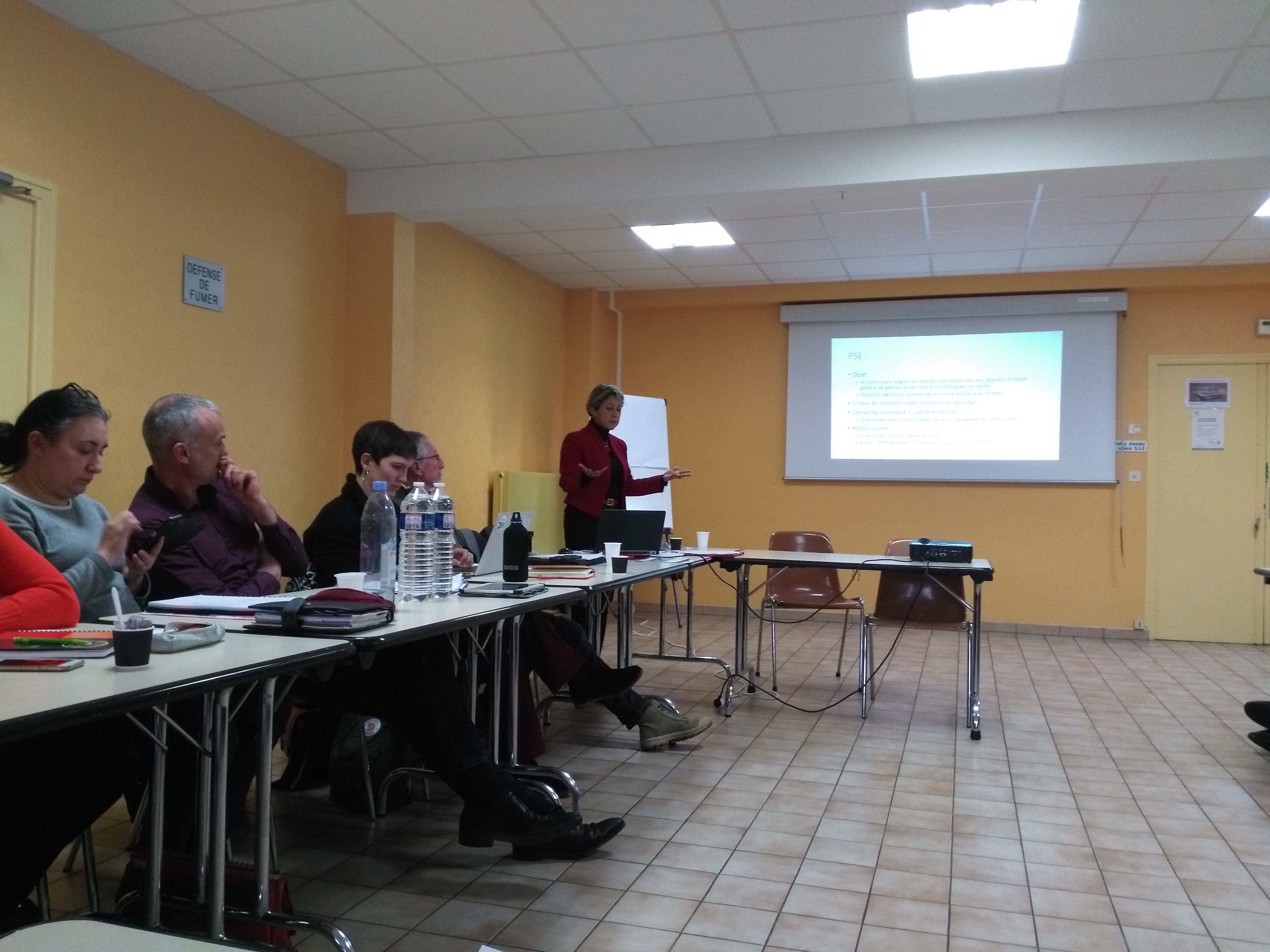 These were followed by a presentation on the Lac au Duc case study conducted as part of the Interreg CPES project, as well as progress in the other two French case studies (BAC de Tremblay, AAC des Sources of the vine). The discussions showed the convergence of questions, both from the point of view of the architecture of financial mechanisms, and ways to determine the value of the environmental services targeted. The private-public nature of financial arrangements was debated, as was the question of how to quantify and verify the environmental benefits generated by the implementation of PES. The issue of mobilising private buyers was also debated, notably the conditions for the mobilisation of "social and environmental responsibility" (RSE) mechanisms by private French companies.

The meeting concluded with a call for multilateral collaboration between the Interreg CPES project and the various actors present, without excluding or favouring a particular actor. The FNSEA, the FDSEA, Alli'Homme, and the COOPs of France are stakeholders in the farmers' ecosystem. Keeping a balance, without taking part, is a guarantee of independence and positioning of the Interreg CPES project.

The role of the Interreg CPES project is to provide the technical and scientific elements, leaving the decision makers involved to choose their means of action. In other words, the Interreg CPES project aims to shed light on the management possibilities of PES by evaluating the different possible scenarios. It is up to the local actors to make the most informed decisions to choose which PES scenario, ultimately, to retain and put in place.