Channel Payments for Ecosystem Services (CPES) is a cooperation project managed under the Interreg VA France (Channel) England programme. It is co-funded by the European Union and the European Regional Development Fund and runs for 45 months (2017-2021). Fourteen partners in six pilot catchments in southern England and northern France are working towards a common goal: to improve water quality through land use change and management by implementing sustainable payments for ecosystem services (PES) schemes.

Regular meetings to monitor the development of the individual case studies are held every 6 months with a rotation of venues between the project partners. This meeting was the first face-to-face meeting since the beginning of the health crisis (Covid-19). 15 face-to-face and 5 remote participants from 6 pilot studies (3 in France, 3 in the UK) attended.

The course of events

During this meeting, the future of payments for environmental services was discussed. Then, the progress of each case study was presented. 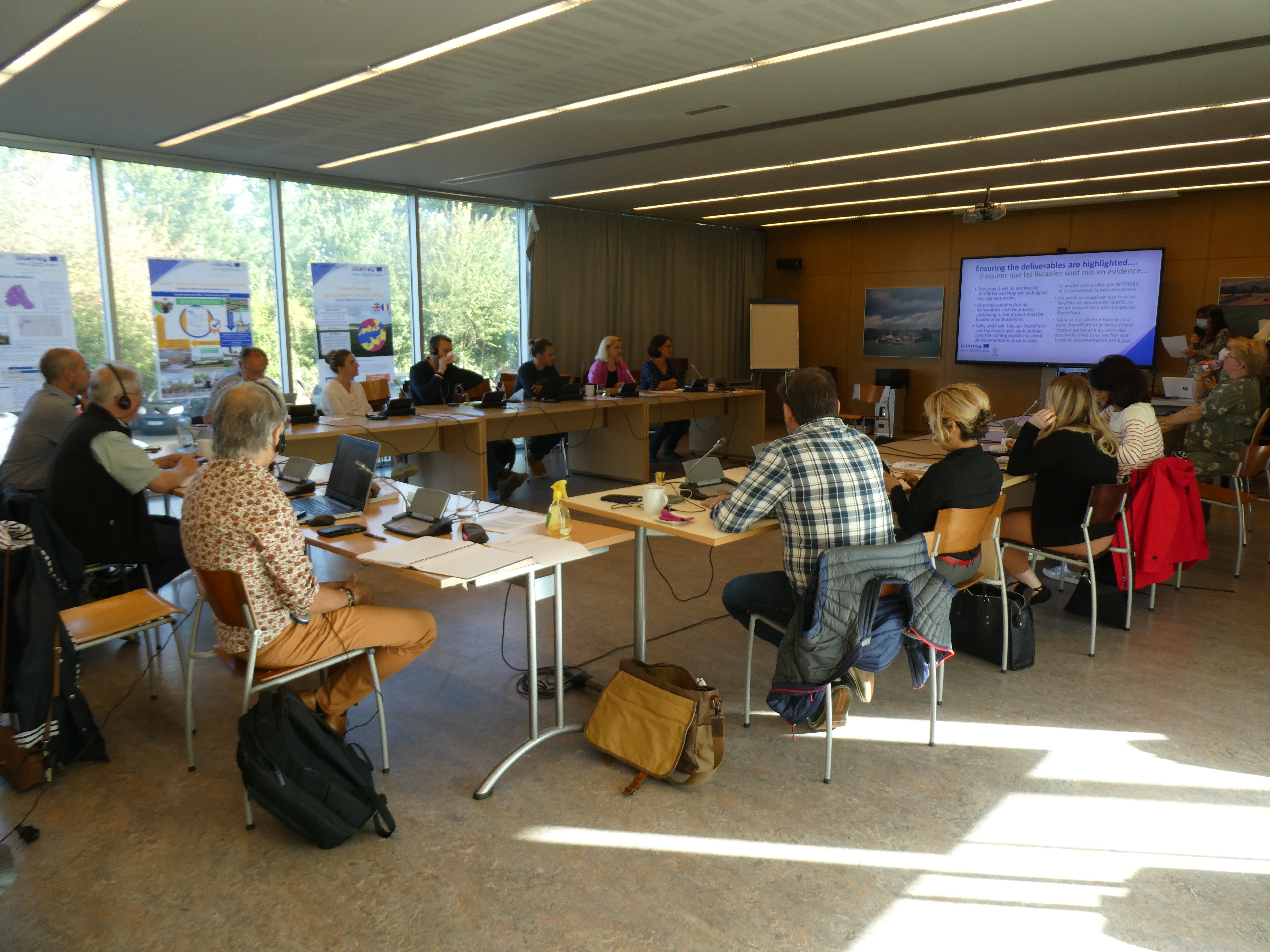 As the Interreg - CPES project is partly funded by the European Union, it is essential to provide complete and timely deliverables. As the end of the project is approaching, expenses must be anticipated and replicable PES proposals formulated.

As previously expressed, the PES schemes of the CPES have been implemented mainly to support the preservation of water quality throughout the watersheds. However, changes in agricultural practices also enable the provision of other ecosystem services such as carbon sequestration and biodiversity conservation.

There is a real appeal to the carbon market. Indeed, water quality as a PES seems to be of less interest to investors than carbon credits or biodiversity (responding to a demand from the general public). In France, carbon sequestration is not the priority and in England, interest is emerging but monitoring remains to be created (permanent measurability, verifiability, etc.). In both countries, everything remains to be built.

The means of financing these multi-services were discussed, and in particular the conditions for their implementation, which must be respected:

A solid and reasonable scientific basis is therefore necessary for the success of the PES project. The latter justifies and perfects the legal basis of PES, which has yet to be constructed in the framework of payments for environmental services.

A discussion on indicators highlighted the importance of monitoring at three points in time: at the initial situation (t0), at the situation to be reached (tn+1) and at the real time situation (tn). But in what quantity and quality?

Several topics were discussed: good governance, co-construction of the PES project, chemical and physical surveys, etc. Between now and the next meeting, their monitoring method should be established.

Workshop 4 - Presentations to the public

The 6 catchment areas were then able to present their progress on the PES project to the public and partners, and indicated their willingness to pursue PES on their territory.

The issue at Tremblay-Omonville is the high concentration of nitrate (and especially nitrogen) in groundwater. The public PES co-constructed with the farmers are based on the achievement of quality objectives (see poster). 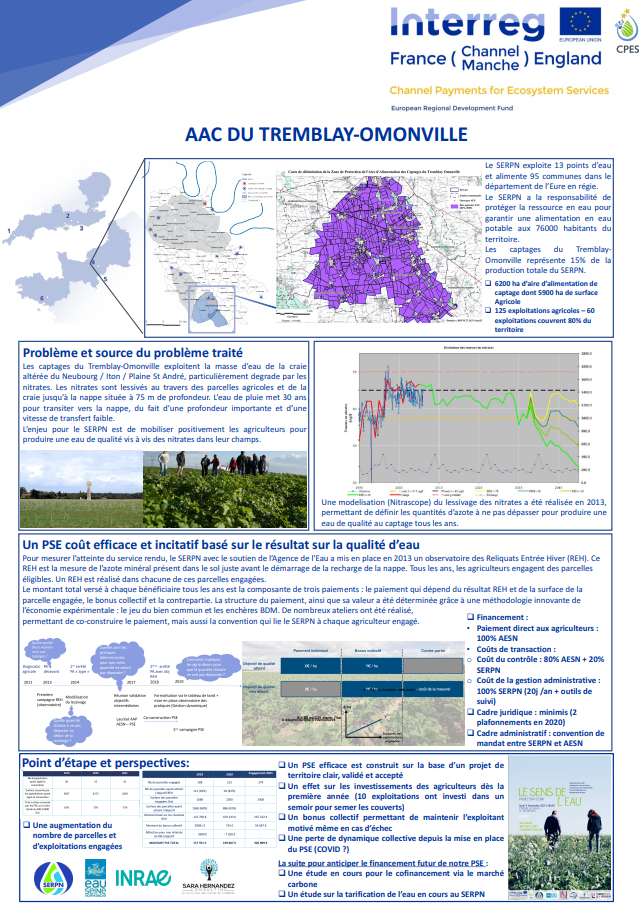 The issue at stake in the Eau de Paris Vineyard is the transfer of pollutants (nitrates and pesticides) into the groundwater. The aim is to move towards agricultural systems that protect water by neutralising the pathways of pollutants. To achieve this, several public PES have been committed and others are in the process of being committed (see poster). 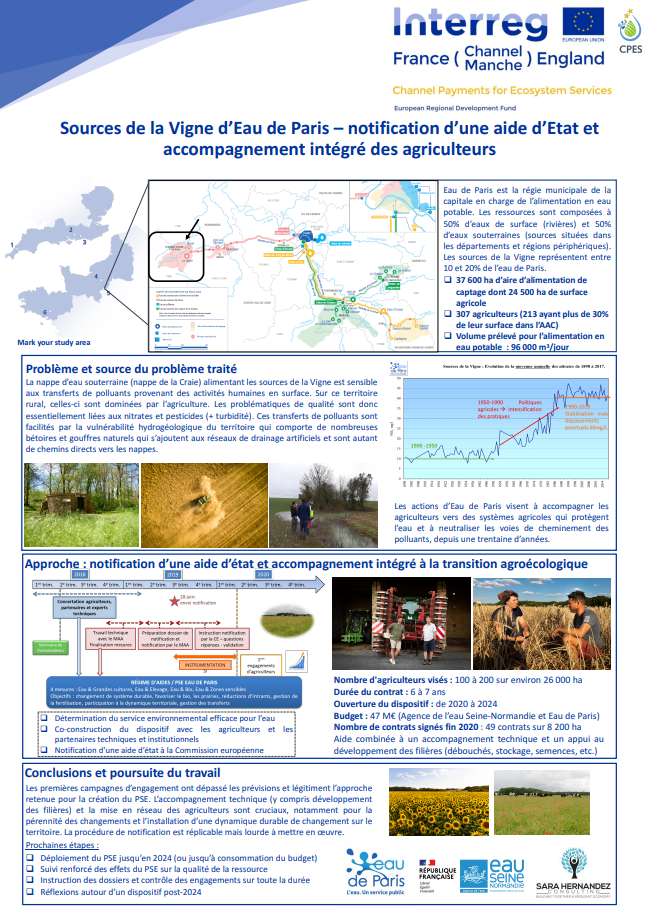 The issue at Lac au Duc is the transfer of phosphorus into the watercourses feeding the lake. The farmers are voluntary but no PES commitment has been concluded for the moment. The specificity of these PES lies in the financing of PES by the private sector (see poster). 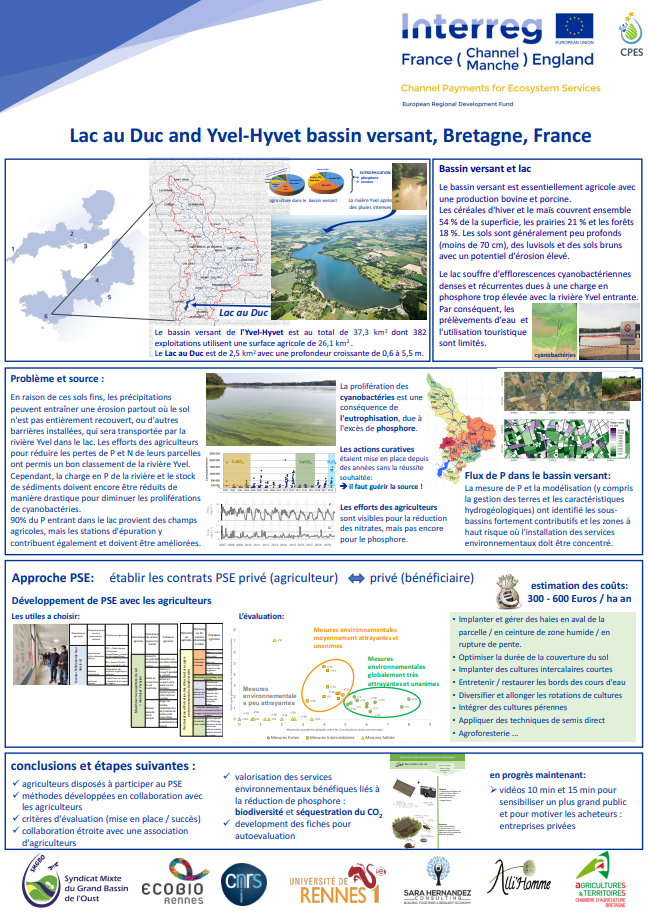 The Westhern Rother pilot is concerned with excessive inputs of pesticides, sediments and nutrients into the rivers that supply the area's users. The aim is to increase the levels of organic matter in the soil by encouraging the implementation of more virtuous farming systems (and in particular by limiting the establishment of intensive arable crops and the production of legumes). Through a vision adapted to the different circumstances, PES contracts could be signed (see poster). 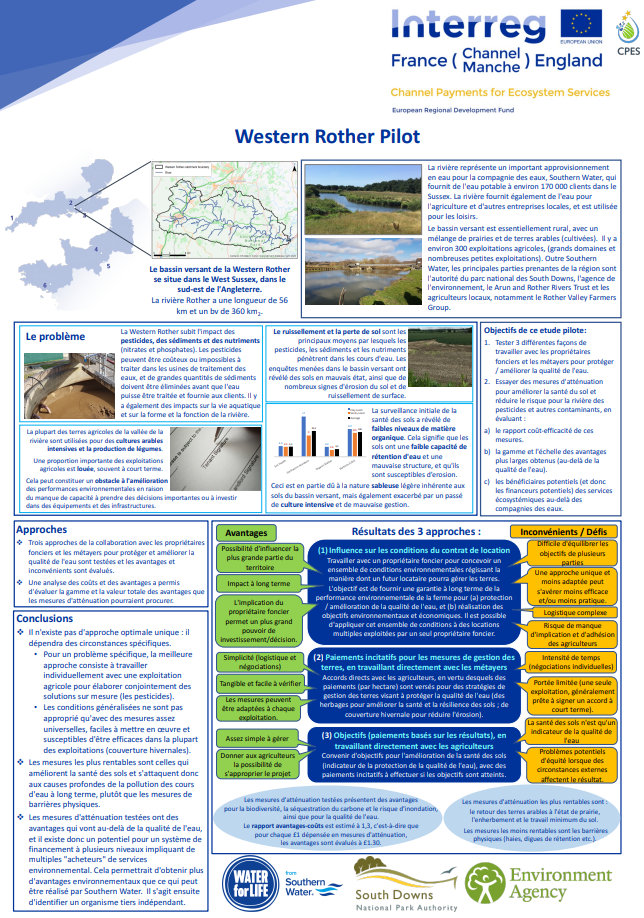 The South Downs pilot is concerned with the high concentration of nitrates in drinking water supplies, causing recurrent eutrophication of the lakes of interest. The aim is to reduce the number of inputs by supporting farmers. Between 2020 and 2021, 30 PES contracts have been signed (see poster). 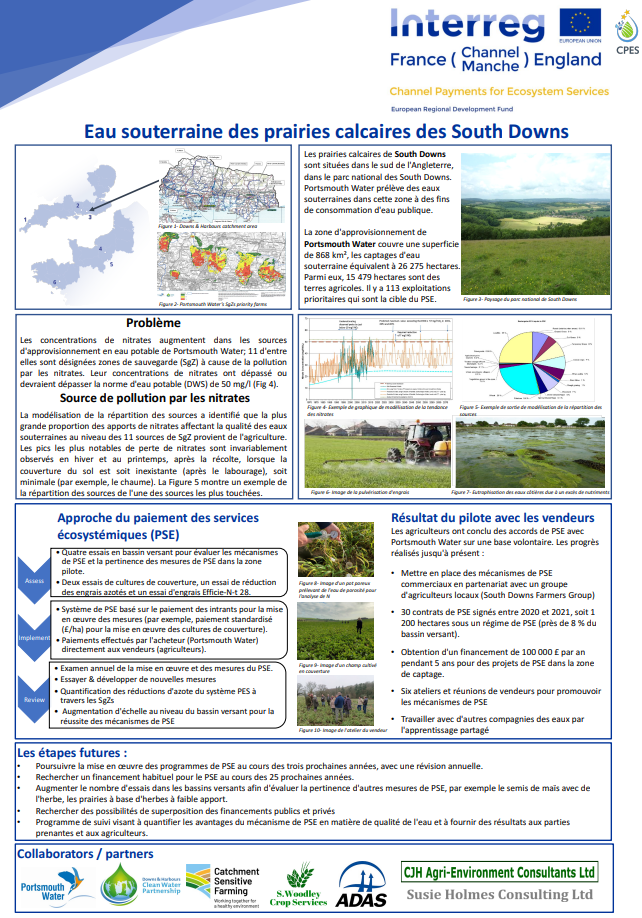 The issue at stake in the pilot is the transfer of phosphorus and nitrate into drinking water reservoirs, causing recurrent eutrophication of lakes of interest. The co-construction of private PES and in particular the auctioning exercise allowed the engagement of 18 farmers (see poster). 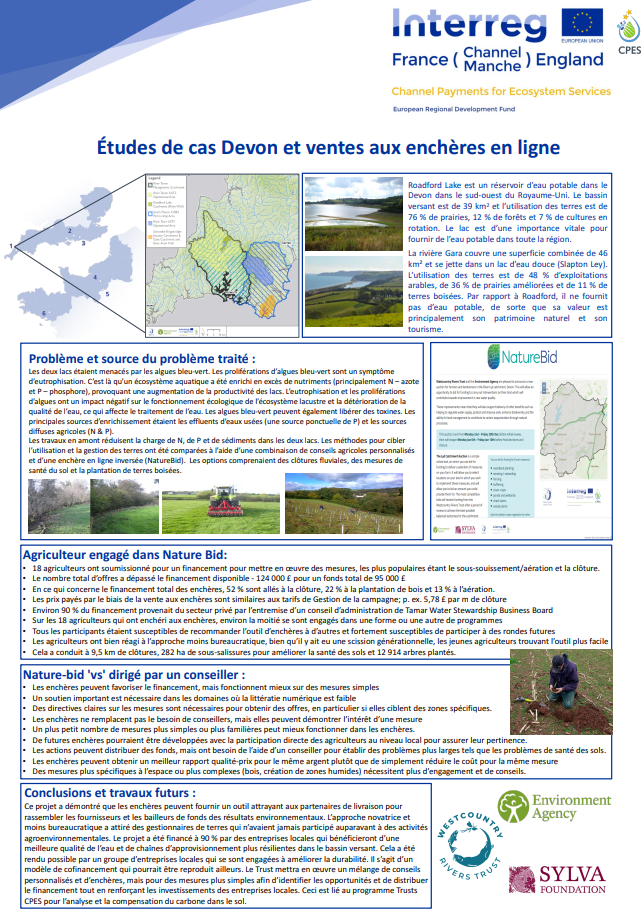 Screening / Debate of the documentary -The sens of water- Upcoming : CPES meeting in Rennes