Home / News Wall / A new stage of the project begins: that of contracting with volunteer farmers. 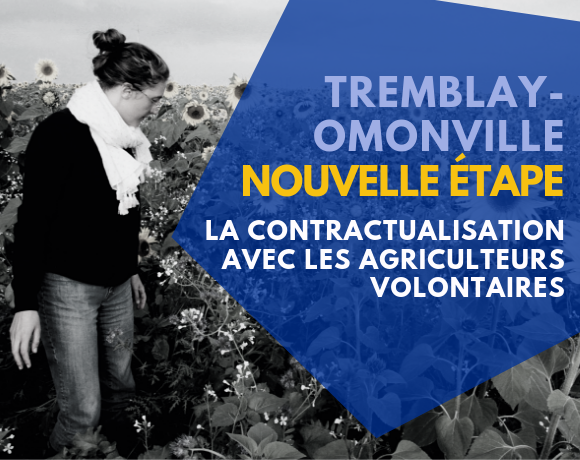 Tremblay Omonville's BAC continues its journey in implementing Payments for Environmental Services. The representatives of the SERPN office have indeed deliberated positively to test the payment this year based on the amounts revealed by the co-construction workshops, with the financial support of the Seine Normandy Water Agency.

A new stage of the project begins: that of contracting with volunteer farmers.

Several years of animation and a co-construction approach

For several years, the BAC facilitator of the territory, Marine GRATECAP, works in close collaboration with the operators. Between collective meetings in plain and individual follow-up, the animation takes several forms throughout the year with the objective of reaching a level of nitrates at 37.5 mg / L. In fact, the current concentrations measured in nitrates are close to the limit concentration of 50 mg / L. The elected officials have therefore aimed to reduce nitrate concentrations to 37 mg / L is the threshold of vigilance set by the agency water.
The animation focuses on three successions of priority crops, for which an objective to achieve the objective of water quality is defined. Each year, the farmers can know their level of Winter Input Residual (REH) that is to say the amount of nitrogen in the soil of their plot, before the recharge of the water table. The nitrate ion NO3- is one of the nitrogen forms available for plants to grow. The amounts of nitrate present in the soil are the result of fertilizer inputs to crops and the mineralization of organic matter. Nitrates that are not absorbed by the plants will be leached at the time of the recharge of the aquifer, that is to say transported by rainwater to the aquifer.
The setting up of intercrop covers is a strong agronomic lever to reduce WRL. Several associations of species can be implanted as covered: phacelia, black radish, clover, vetch, ... (see photo)

Setting up agreements with farmers

Following the co-construction meetings led by the SERPN and Sara Hernandez Consulting, all the farmers of the BAC, 125 operators, were able to receive this summer a letter announcing the possibility to contract with the SERPN to engage parcels in order to a payment.
Each participating operator can thus commit, for one year, parcels corresponding to the priority successions, on which withdrawals will be made: the payment will take place only if the objective of balance is reached in the parcel, that is to say say that the farmer has produced quality water with respect to nitrates under his field. The amount depends on the area engaged by the farmer as well as the succession of crop concerned. Indeed, for each estate, an amount was allocated during the co-construction workshops. In terms of commitments, farmers are not constrained by the means used to achieve the balance objective: the payment is totally based on the achievement of the result, leaving them the choice of the practices they wish to implement. in place and that are adapted to their situation.
Already about twenty operators have asked the facilitator to study the possibility of contracting and engaging their parcels on the BAC. During these meetings, it is an opportunity to discuss the previous results of REH but also to talk about interculture covers, fertilization, weed management, ....
After this stage, a follow-up will be carried out in the committed parcels namely: observation of the covers, weighings of biomass and samples of soil for analyzes.
Lac au Duc: 5 educational sheets to understand the CPES project Portsmouth Water's cover crop trial demonstrates benefits to the environment and farmer