About half of the water supplied to Paris comes from groundwater collected 100-150km from Eau de Paris. Water from the Springs of la Vigne has been collected and transported by gravity to Paris via the Aqueduct of Avre since the beginning of the 20th century. They are located at the intersection of three departments and two regions, Normandy and the Center. These waters are treated at the entrance of Paris in the Saint-Cloud treatment plant.

The Springs of La Vigne catchment corresponds to the watershed that contributes water to the springs by infiltration or transfer. It is a large area of ​​about 380 km2 spread over about forty communes. It's mainly a rural area, with a land use of 60% agriculture, 40% in forests and grasslands and less than 1% urban area. In this area, other catchments feed the local population and present identical problems of quality, giving rise to territorial cooperation work around the protection of the same water resource.

Et the beginning of the 20th century, water was collected from rural areas far from Paris in search of good quality water. Due to the development of agricultural activities on catchment areas, their impact on water quality has gradually been identified.

Measurements of nitrate concentrations in the catchments of La Vigne since the beginning of the XXth century show a significant increase in nitrates between the 50s and the 90s with a stabilization until today at around 40 mg/l. Due to the hydrogeological context, the Sources de la Vigne also show significant variations in nitrate concentrations, with occasional exceedances of the standard of 50 mg/l. 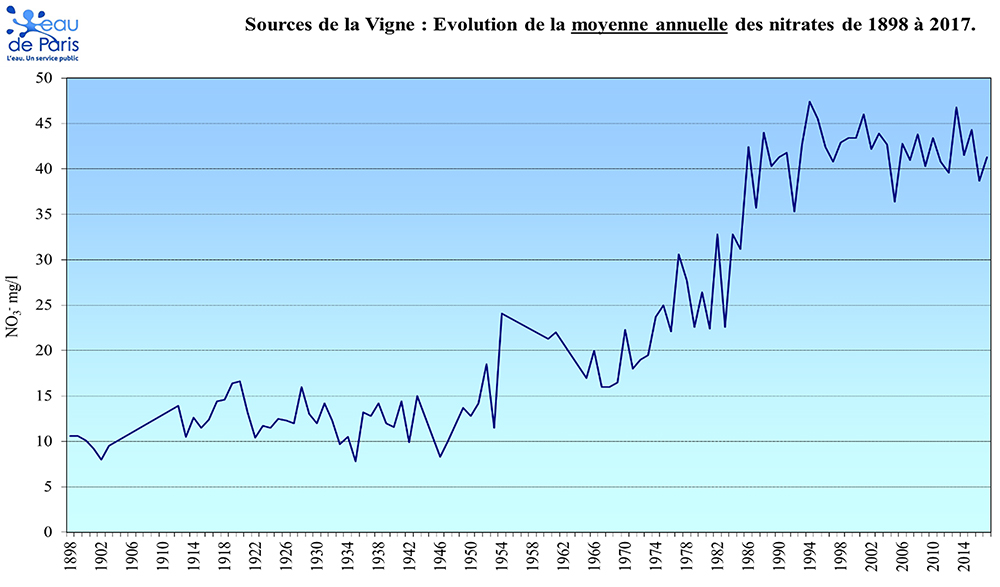 The other problem encountered is that of pesticides. The hydrogeological context means that it is possible to find molecules banned for 15 years at the abstraction point. Their concentration is now below the limit of quality, and is evidence of slow transfers through the groundwater. In parallel, fast transfers are observed through the karst, cracks in the chalk where the water infiltrates and quickly reaches the springs. Spot detections of mostly herbicides are sometimes measured only a short time after their application, showing the speed of these transfers. It should be noted that Eau de Paris is looking for more than 300 molecules every 15 days, with increasingly fine detection procedures. The interpretation of water quality must therefore be analysed taking this rapid transfer into account, whereas in other catchments, the analyses of pesticides are only carried out 1 to 4 times a year.

The Saint Cloud plant treats the waters from the springs of La Vigne, and eliminates pesticides and turbidity. The global water supply scheme of Paris and the historical conformation of the aqueducts also makes it possible to manage the nitrates problem. The water distributed in Paris is thus always in conformity with sanitary standards. 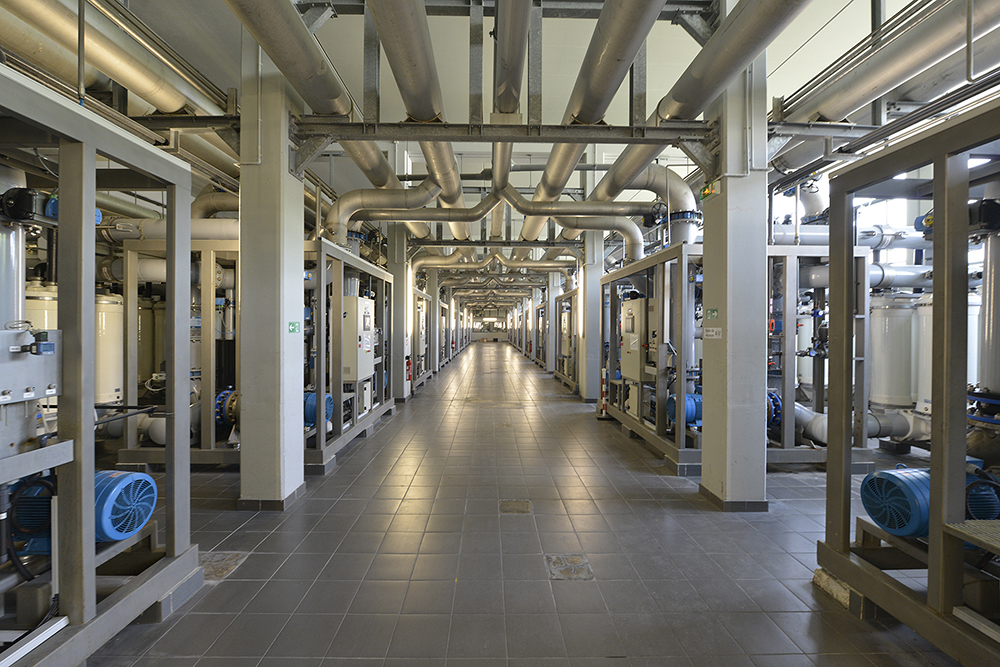 Strategy for protecting the resource on La Vigne catchment area:

Vulnerability to pollution is significant and dispersed throughout the area, particularly because of karst, an underground water table close to the surface, and the presence of drainage. To protect the water resource, it is therefore necessary to encourage the reduction of pressures throughout the catchment.

The main agricultural practice is based on simplified rotational cropping system with livestock polyculture farms still present but these have been in decline for many years. Eau de Paris' water resource protection strategy is based on knowledge of the challenges in the area and is structured around several axes: agricultural practices; spatial planning; sectors and diversification: agriculture and communication. The whole is based on the axis of historical and continually developed knowledge, to know and understand the territory and its actors.

The agricultural strategy combines technical support, collective support, financial support, and the acquisition of reference farms to better manage actions, with the support of experimental farmers. The acquisition of reference farms also makes it possible to acquire intermediate indicators and to evaluate the impact of agricultural practices on water quality. As part of a partnership with Eau de Paris, the Chamber of Agriculture of Eure-et-Loir is carrying out soil residue monitoring to measure the amount of nitrogen in the soil and to measure the risks of nitrate leaching to the groundwater.

The farmers involved are increasingly convinced by the benefits of developing their system, for the sake of the environment but also for the good of their farming efficiency. For this, financial support is needed for the transition to be sufficiently sustainable and bring about such ambitious changes. 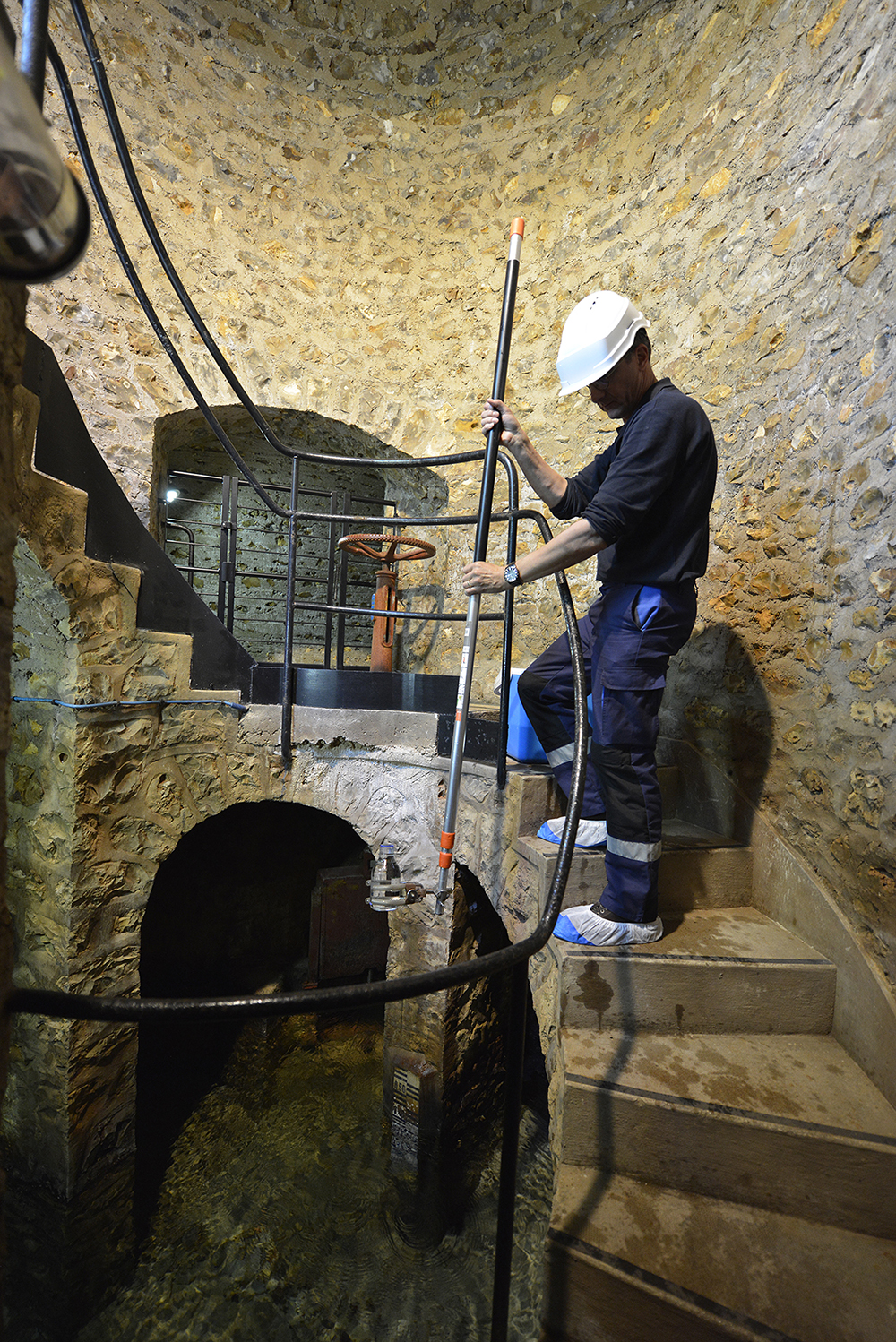 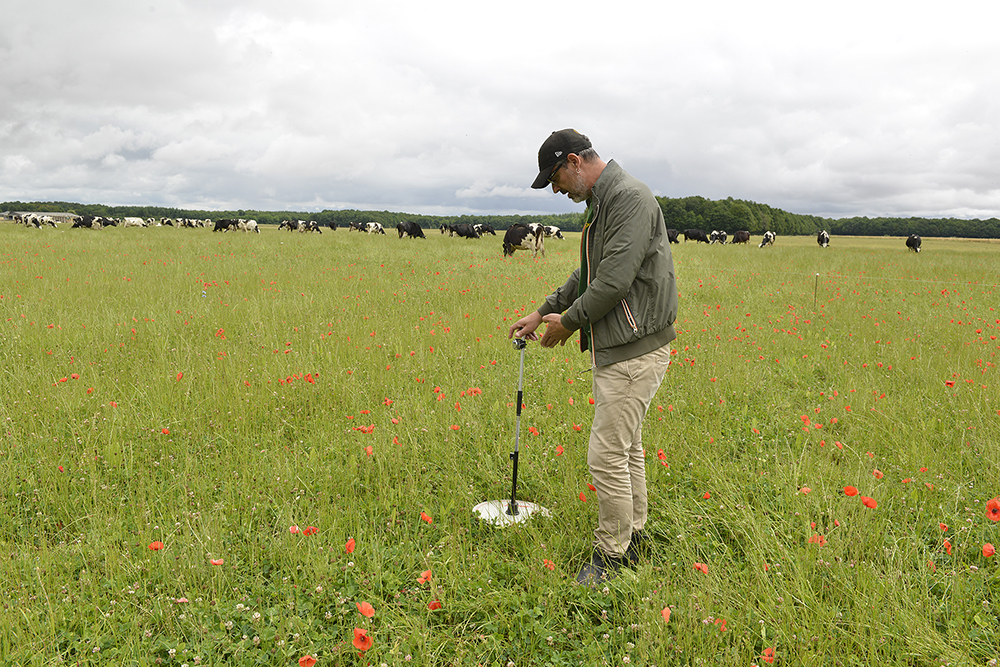 Financial support has been offered to farmers since 2008 through Agro-Environmental Measures (AEM) and support for organic farming. The strong commitments of farmers have been observed, through the significant reduction of their use of pesticides. In total since 2008, 1/3 of the surface area and 100 farmers have already engaged in a AEM. These measures are an important lever of animation: the commitment of a farmer makes it possible to follow his practices, to involve him and to accompany him, individually or during collective actions. Sustainable changes in farming practices are thus observed among committed farmers. 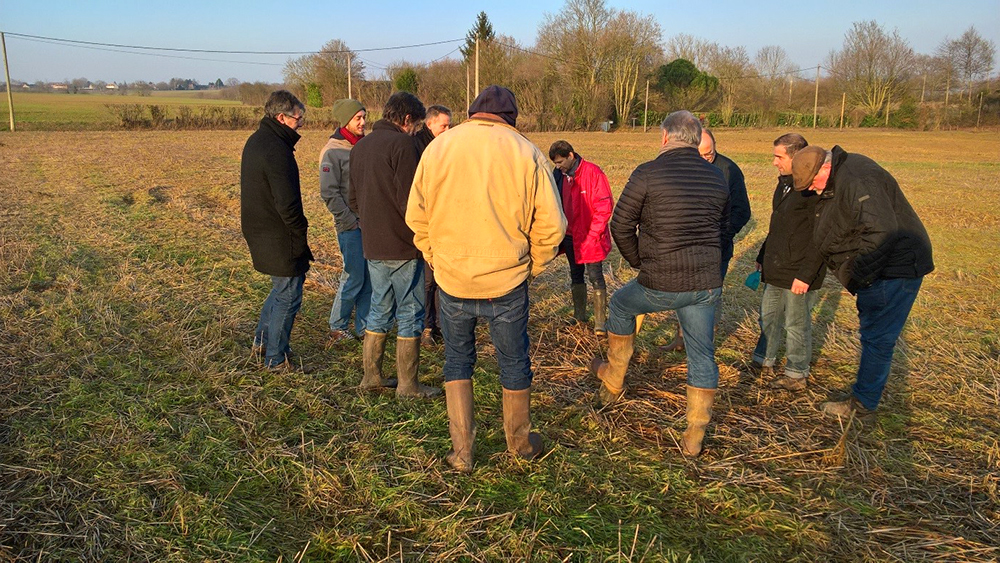 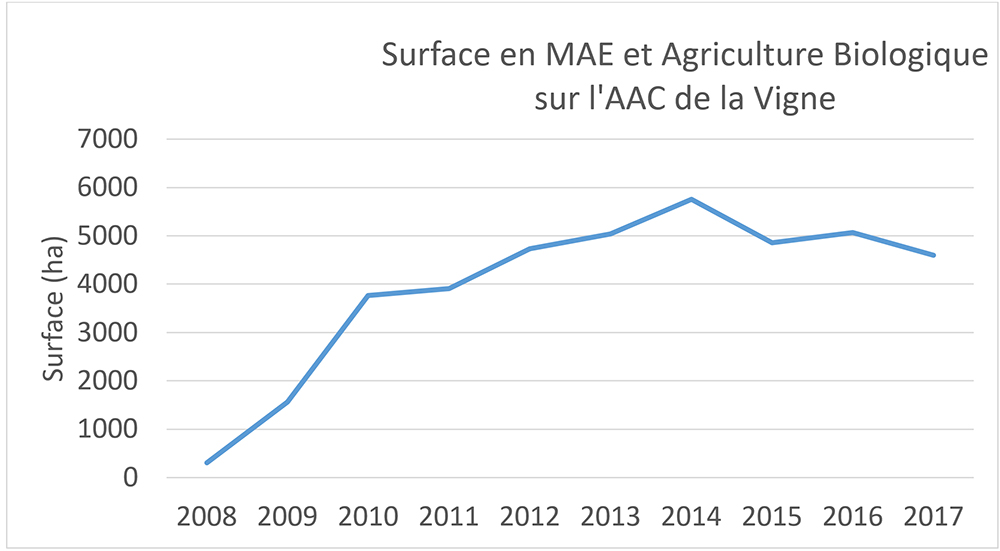 However, the administrative complexity and the lack of adaptability to the specificities of the territories have led to a gradual decline in commitments since 2015, leading Eau de Paris to seek new solutions for more appropriate financial assistance.

To innovate and improve the support of the farmers, Eau de Paris reflects on the different forms of benefits which could be proposed to the farmers who protect the water resource. This includes the technical support, the valorisation of their practices, and the financial support. On this last point, Eau de Paris plans to set up new aid to follow up the AEMs, with public funds in compliance with the agricultural guidelines of the European Commission, but is also studying the possibility of financing by private funds.

The INTERREG project is fully integrated into these reflections. The exchange of experience with the other pilot sites and the tested methodological elements aimed at supporting Eau de Paris in the implementation of financial support for the changes of practices in an effective and adapted way. 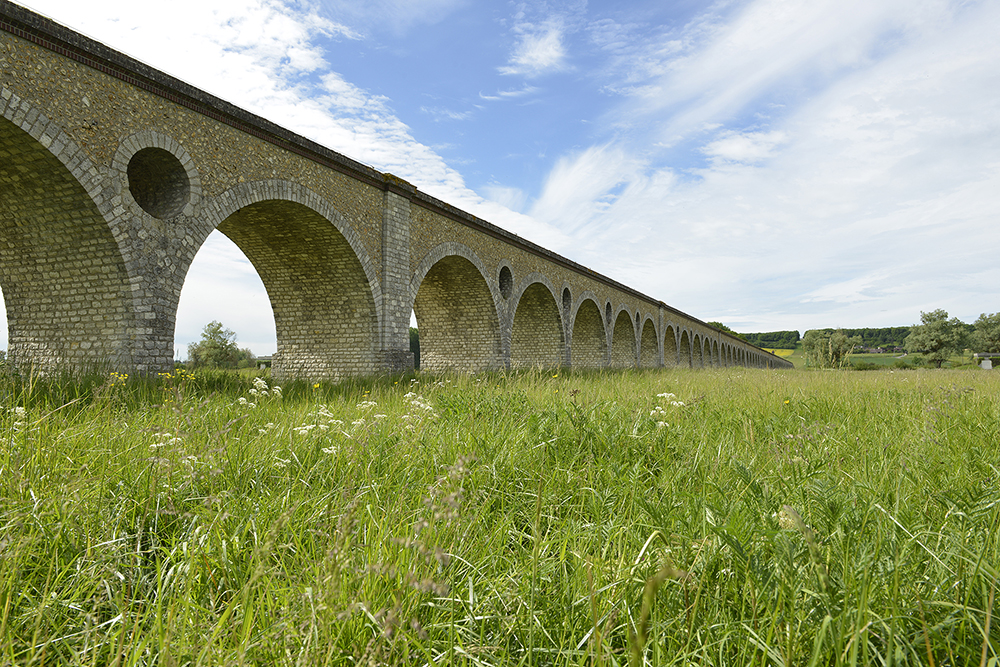 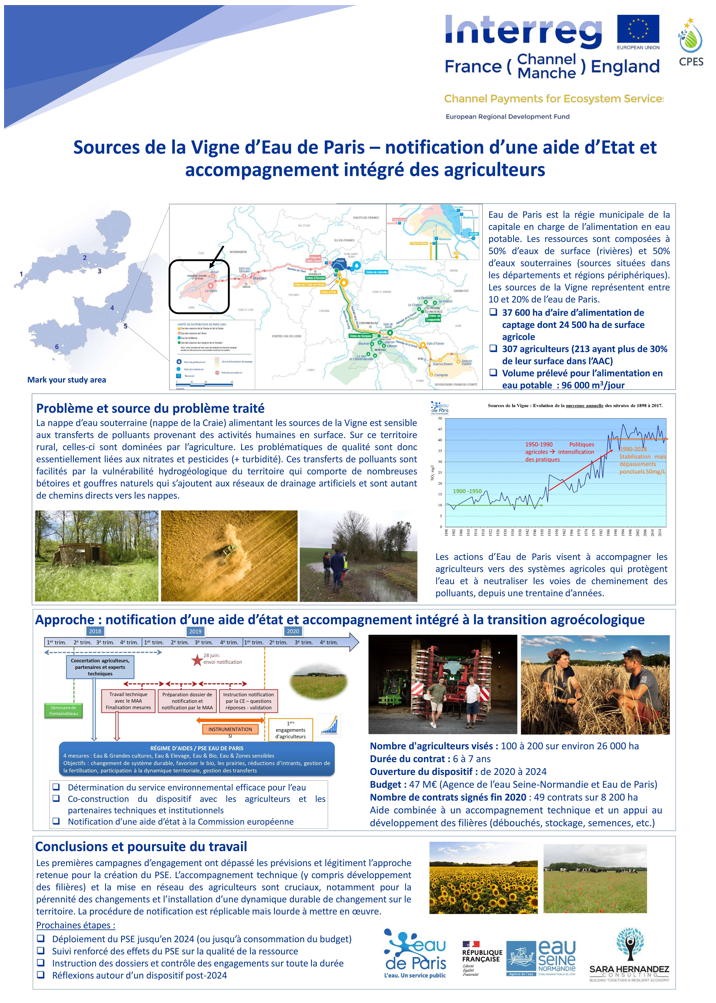